What is the Difference Between Duvet, Doona, and Quilts? 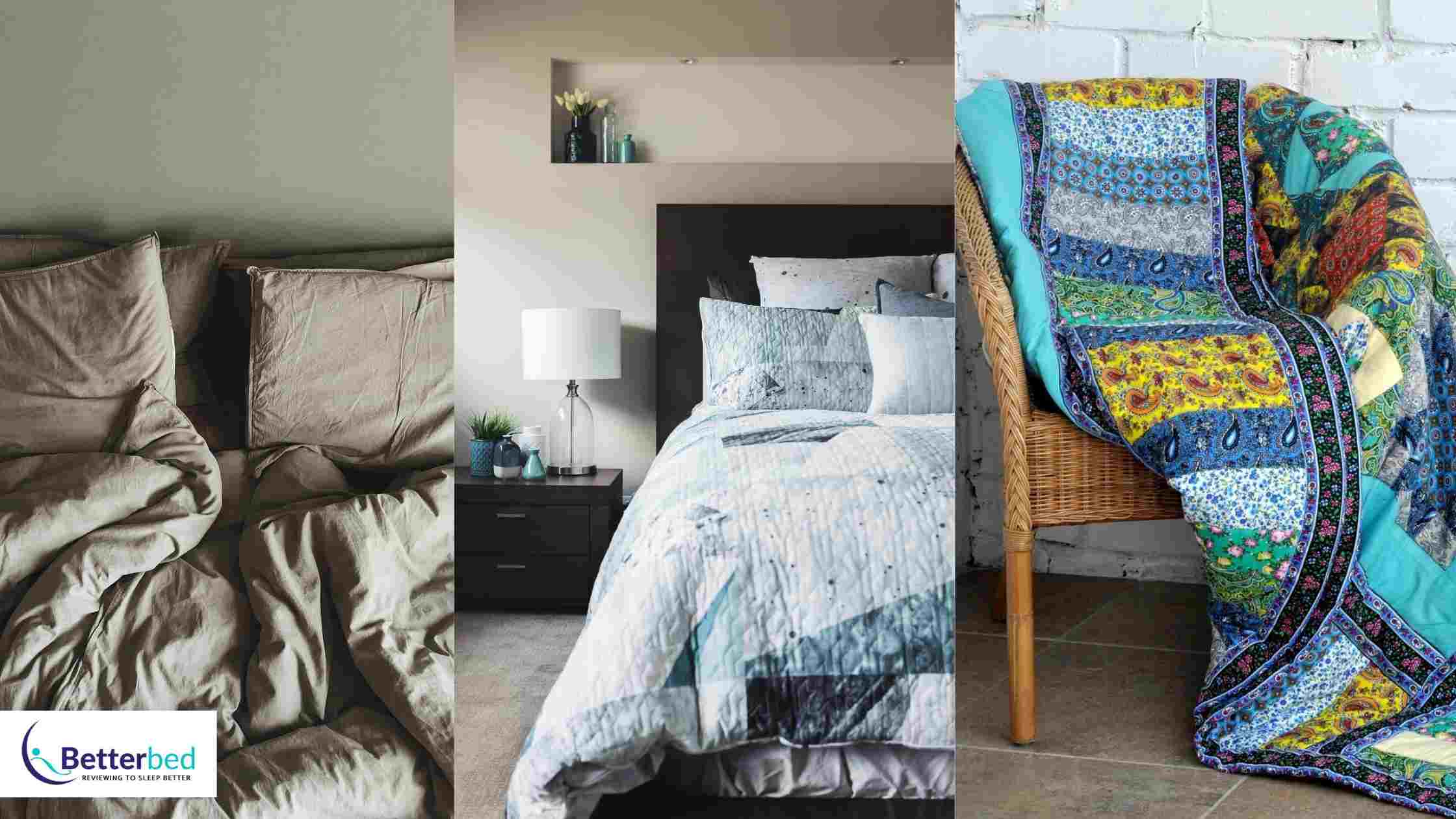 Simply put, there is very little difference between a doona, duvet and a quilt, when these terms are used in Australia. However, when shopping for bedding or travelling, you can get confused with all the different bedding materials available. To receive what you expect when you buy a particular type of bedding, especially when you are ordering online, it is important to properly understand what the different terms mean in the bedding industry. BetterBed explains three closely related bedding terms in this article – quilt, doona, and duvet, to make your bedding shopping journey much easier.

What is a Quilt?

Traditionally, quilts are layered (at least three layers), with the top and bottom made of woven fabric and a filling in between these two. The filling could be natural like wool quilts or cotton quilt or synthetic like polyester. While in Australia, quilts generally have a single fabric on the top and bottom, in other cultures quilts are made with different pieces of fabric stitched together to create various interesting patterns.

Aussies also use quilts as inserts that go inside a cover, to both keep it clean and to add a pop of colour or match the bedroom decor with the quilt cover. The thickness of a quilt determines its weight and the insulation it provides. Traditional quilts in most cultures are used as they are without a cover as they have a patterned stitch already.

What is a Doona?

Doonas are basically the same as quilts, except for two things. Doonas can be quilted or non-quilted inserts and the term doona is mostly only used in Australia. In other countries, a doona would either be referred to as a comforted (the United States) or a duvet.

Like quilts, doonas also have a filling and these fillings include materials like cotton, wool, duck and goose feather and down, and polyester. They can both be light and heavy and are created to be used in different seasons, just like quilts in Australia.

You might wonder if doonas are the same as quilts, then why the different names. Doonas are basically the trademarked products of The Tontine Group and Aussies use the term doona commonly for the same reason we call our lawnmowers Victas.

What is a Duvet?

A duvet is basically the same as a doona. This term is generally used in Europe and the word duvet means ‘down’ in French. Similar to a doona, a duvet has filling enclosed in quilted fabric and is inserted inside a duvet cover. The filling options for a duvet are the same as doona – wool, cotton, polyester, and feather and down, encased in different fabric options like cotton, silk, or polyester.

While in Australia, you might get the same product whether you order a quilt, doona, or duvet. If you go to Europe, you will have to use ‘duvet’ as they might not be familiar with the word ‘doona.’

Some Other Bed Covers

If you want to make yourself familiar with other bedding terms, this section will help you with that. So let’s quickly summarise the other types of bedspreads, so you have bedding knowledge to comfortably shop and use the right terms when you travel.

The term ‘comforter’ is generally used in the US for quilts. There are two differences implied by the term ‘comforter’ compared to the term ‘quilt’ in Australia. The first is that a comforter is not an insert, which means that it goes directly on your bed without a cover, while a quilt is generally inserted inside a quilt cover. The second is that traditional quilts are generally a patchwork of different fabrics sewn or embroidered together while comforters are usually dyed for color. The function of a comforter is the same as a doona, duvet, or quilt.

A blanket is thinner than a quilt or a duvet and it does not have layers. It is a single piece of cloth, mostly woven to increase insulation and create more warmth.

Coverlets are thin and lightweight bedspreads that usually go above existing bedding layers, but this is not to say that coverlets cannot be used on their own. Due to their thin construction, coverlets are generally not associated with winter bedding.

Coverlets are usually used to add a decorative touch to your bed with added matching pillowcases, though this is not a rule. They can also be used in the place of a blanket as they are woven and provide enough warmth.

In conclusion, there is little to no difference between the three terms – quilt, doona, and duvet, when used in Australia, and they can be used interchangeably. However, it is important to remember the slight differences between them when you are travelling to Europe or the US, so you can use the right term for a particular type of bedspread and not receive a traditional quilt when you actually wanted a doona.

Click Here To Get Huge Discounts On Australia’s Top Brands!!

Leave your comment
Cancel reply
Related posts
A little bedtime reading
Sign up for our newsletter to stay in touch.

Mattress brands are competing for your attention. It can be overwhelming to decipher the main differences and choose the right one. We make it simple.